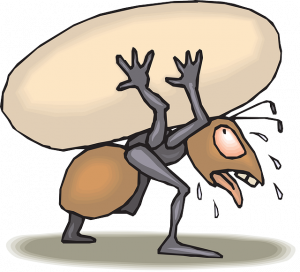 The Bible in Proverbs 6:6 says, “Go to the ant, you sluggard; consider its ways and be wise!” On the face of it, God is saying that we should be busy with our productive activities like ants.

However, the context of the verse has a wise father giving his son wise advice. The son has entered into an unwise relationship and agreement with someone. The father tells him to work very hard to have the means to get out of that arrangement.

God through Solomon does give us valuable advice here, though. He means that our time is really his time to be used for him.

Our divine Maker also made the ants.

For some time, ants invaded our bathroom. As a result, I had an opportunity to watch them. We placed two ant traps, one on each end of the room. Most of the ants made a straight ant-line to the traps from their nests and back again. However, after some of the ants got some of the poison, they wandered around the bathroom aimlessly as if drunk.

After a while, the ants disappeared to make our bathroom boring again. However, this morning my wife informed me that they had invaded the pantry.

Some people say that we shouldn’t hurt any creatures. I say that as long as they stay out of my condo, I agree. When they do, we will engage in “Ant-Wars.” And when the ant babies come along, it’ll be “Ant-Wars: the Next Generation.”

A relative had his house overrun with cockroaches. When I saw the roaches flit across his kitchen breadboard, I asked him, “Why do you allow the roaches to be in your house?” He said, “God made them too.” I said, “I agree, but they don’t need to live in my house.”

Well, what does this have to do with God’s divine nature, which is our present topic?

According to Psalm 19, God reveals his divinity in his universe, “The heavens declare the glory of God; the skies, the work of his hands.”

The glory of God in the Bible is his divine brightness, which our eyes can’t bear to look at, but his universe shows his divine power in its order and beauty. The psalmist, King David, means that we can detect God’s greatness by observing his created creatures and universe.

If you know doubters of the Creator, order them Doubtbusters! Meanwhile, give them What God Has Done.

I invite your responses. We can agree to disagree about God. You have the full right to your opinions.